Boba, bubble, tapioca. Whatever it's called, I love it and it's my latest addiction! 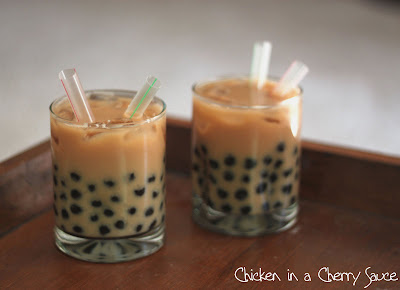 There seems to be something satisfying about slurping up a boba through the chunky straw and playing a mini game of oral-squash with your tongue, whilst drenching your taste buds with delicious ice-cold milky tea.

In my search for tapioca pearls, I came across some plain ones in the local Asian market, as well as some dark ones, of which, the packaging stated clearly that their use was for boba drinks, unlike the plain. 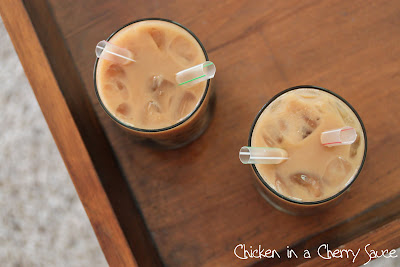 I first experimented with the plain large tapioca pearls. I found various recipes on the internet but ended up going along with my own... I boiled the pearls in water with a 1:7 ratio for about 30 minutes. The water became incredibly starchy, so I rinsed the pearls with cold water and boiled them up again, as they were still fairly firm and had formed only a thin translucent layer, which indicated that they were not cooked all the way through. I boiled the pearls for the second time for around 20 minutes.

The water became fairly starchy again, so I rinsed them again with cold water. Although they still had a white opaque inside, they were chewy throughout. They were significantly smaller than the tapioca pearls that I am used to consuming in the teas that I have bought. They also had a soft non-bouncy texture (perhaps overcooked). I stored them over night in a sugar syrup. The following day the texture of the pearls had changed dramatically. They literally disintregrated in the mouth leaving a rather disgusting soggy, grainy texture - fairly unpleasant!

I decided to try the dark pearls that were specifically for the use of boba teas. These were advertised that they "only take 5 minutes". I boiled these for the 5 minutes and rinsed the starchy residues with cold water. These were much more bouncy and chewy and had the consistency that I was looking for! Hurrah! 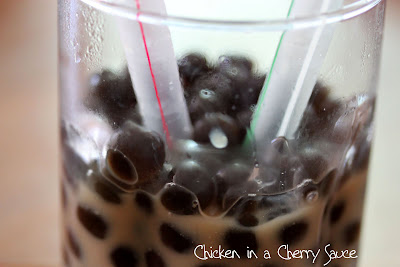 I am not entirely sure what the recipe should look like for Boba Tea. I made mine up as I went along and it proved to be quite a success!

I brewed one chai tea bag in half a mug of hot water, sweetened it with two teaspoons of honey and set it aside to cool. I then boiled the tapioca pearls for a good half an hour and rinsed them with cold water once they had finished cooking. I combined a generous helping of tapioca pearls with the tea and topped up the glass with ice and almond milk. After a quick stir it was ready to consume!

Most restaurants that serve Boba teas have a vast selection to choose from, with milks ranging from almond to coconut, and teas from black with spiced apple to green with rose. Most restaurants that I have visited also offer many "slushies" to go with the tapioca pearls also. My current restaurant-favourite is probably green tea with rose and coconut milk, but, as with all things in my life, I love variety, so my "favourite" changes frequently.

The beauty of following this simple recipe at home is that you can create it to comply whatever your specifications may be. I wonder what yours would be? Earl Grey tea with lavender, almond milk and honey? Green tea with molasses and coconut milk? Or, perhaps, a coffee with hazelnut syrup and regular milk? And, who says you can't add a drop or two of Baileys to it?! :) 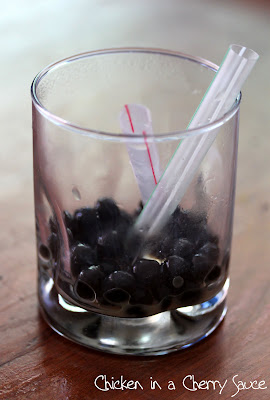