Empanadas with Chicken in a Cherry Sauce to Celebrate the 2nd Birthday of my Blog! 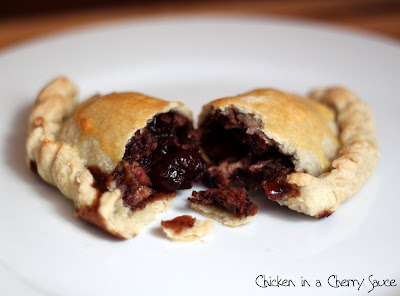 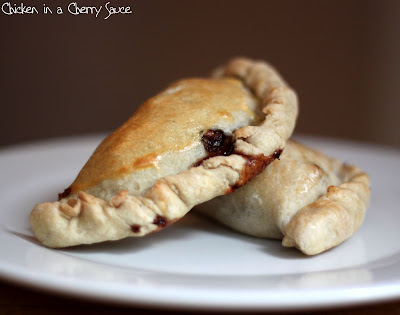 Chicken in a cherry sauce empanadas
It seems that cherries are extremely scarce in Buenos Aires. My boyfriend and I searched all over the city for something cherry. In all of the main supermarkets, there were no cherry jams or cherry preserves, no dried cherries… just nothing! 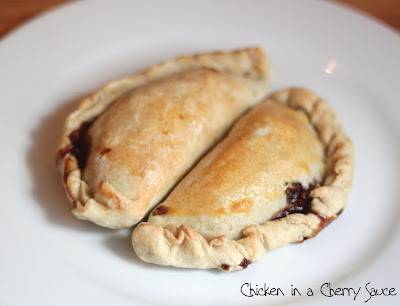 Chicken in a cherry sauce empanadas
After much time searching, we finally found a small jar of cherries in syrup in a tiny corner shop. These weren’t ideal for a savoury cherry dish, but at least they were cherries! I then realised that we needed some sort of jam to thicken the sauce. I adapted this cherry sauce recipe from Delia’s sour cherry sauce that she accompanies with roast duck (I made this a few years back and it was fabulous). Clever novio [boyfriend] found a jar of cherry preserve in another tiny store that his grandmother had recommended. Perfecto! 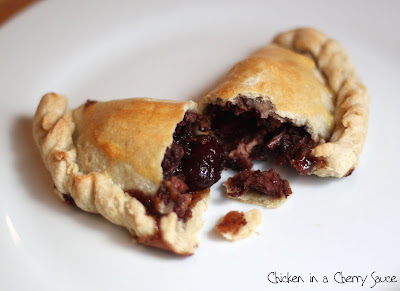 The inside of a chicken in a cherry sauce empanada
As I researched empanada recipes on the internet beforehand, I was shocked to find that almost all of the recipes used shop-bought empanada pastry discs. I’m pretty sure that England does not sell these, and I didn’t want to cheat. I was definitely going to make my own dough. I roughly followed this recipe by Laylita; however, I found the dough to be very tough and difficult to handle. I made another batch with a lot more water and the dough was perfect. 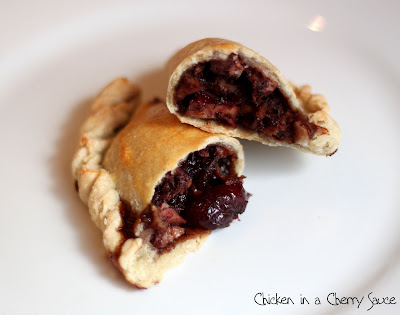 Chicken in a cherry sauce empanada
As I read in many empanada blog posts, they really are time consuming to make. But I also read that they are totally worth it – and they definitely were. I couldn’t live with myself knowing that I’d cheated with pre-made empanada discs!

Chicken in a cherry sauce:

Method
Empanada dough: Mix together the flour, salt and butter in a large bowl using a spoon until a breadcrumb-like texture is formed. Mix in the egg and water to form a dough. Separate the dough into two balls. Wrap the dough balls in cling film and place in the fridge to rest for approximately 30 minutes.

Chicken in a cherry sauce: Bake the chicken breasts on a greased baking tray for 25 minutes at 200°C. Slice the cherries in half. Add the wine, cherries, thyme and preserve/jam to a saucepan and simmer on a low heat for approximately 30 minutes, stirring occasionally until the wine has reduced and a thick sauce is achieved. Slice the chicken into small cubes and combine with the cherry sauce.

Place a heaped tablespoon full of the filling into the centre of the disc. Brush the edges of the disc with a little egg to glue the edges together. Fold over the pastry to create a semi circle and press down the edges to seal the empanada.

Pinch the edge of the pastry with two fingers and fold over. Continue this action with the rest of the empanada. (It takes a couple of empanadas to get the hang of it! This short video shows the folding technique.) One may prefer to crimp the edges using a fork instead. Brush the empanadas with egg before placing on a greased baking tray and bake at 200°C for 25 minutes, or, until they are golden brown.

Note: I ended up using a clean sock to brush the empanadas with the egg, as I didn't have a pastry brush. It worked very well! 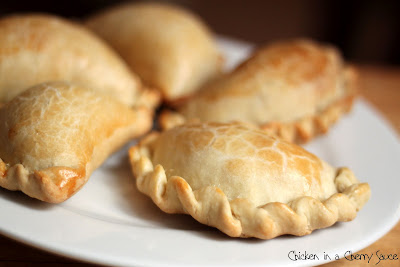 Meat empandas
We decided to make some traditional meat empanadas, too. 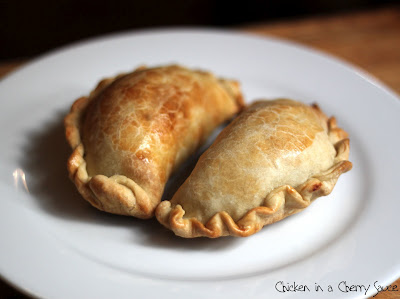 Meat filling: Fry the onions, meat and herbs in a saucepan with the oil until the meat is cooked through. Add the pepper and raisins and cook for a further 15 minutes on a low heat. After cooking, mix in the olives and eggs. 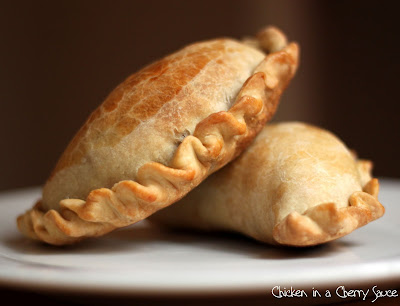 The folded edges of the meat empanadas
We both preferred the chicken and cherry sauce empanadas, yet still enjoyed the meat ones, too. The folding of the edges can be tedious, but I think they look just beautiful (even more so after baking). Practice makes perfect! They also provide a nice crunch in contrast to the rest of the empanada. 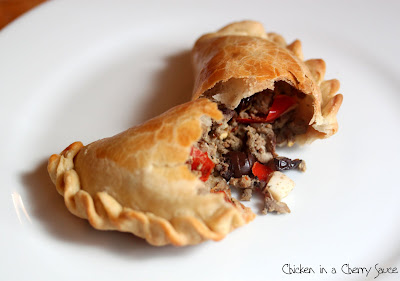 The inside of a meat empanada 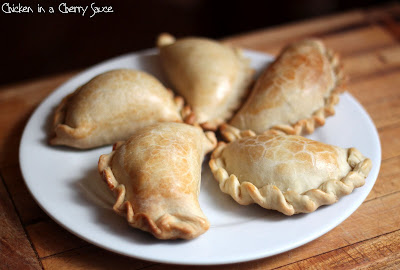 Life has, indeed, become busier since the 1st birthday of Chicken in a Cherry Sauce and, as a result, it has been difficult to keep up with regular blog posts. Blogging has helped me a great deal with my professional, as well as my social (by all you fellow bloggers!) and indeed my life in the world of food. I absolutely adore blogging about food and I'm very much looking forward to another year of it. Thank you, so much, to all of my readers. Every comment about my blog, whether online or in person, always brings a huge smile to my face and a great deal of happiness! Thanks to all of the beautiful food blogs out there that have inspired me - I can honestly say that I spend more time on food blogs than any other site on the internet! Please continue your great support, it is truly appreciated.