I first discovered Vosges Haut Chocolat when I came across Mo's Dark Bacon Bar in a local supermarket in Davis, California. At work, I have been co-writing an article about innovative new confectionery products for Kennedy's Confection Magazine each month. During my searches I came across Vosges again and I have fallen in love! Some of their bars sounded really interesting and unusual and nothing like I had tried before.

I decided that I had to try some of them. I checked the cost of international shipping and was quite shocked to find that it was $75! When I used to live in California and posted things to friends at home it cost around $20. I have a friend who lives in Los Angeles so I asked him if he could do me a huge favour by going to a Vosges Haut Chocolat store in Beverly Hills, buying me some of these incredible bars and posting them to me and reimburse him. He happily accepted this assignment and, through the power of today's technology, he included me in the shopping experience by sending various images of the inside the store. We also exchanged a few phone calls through Viber.

There was an offer of 6 bars for the price of 5, so he bought the Effie and Katniss bars from their "Hunger Games Catching Fire" collection and the Matcha Green Tea, Reishi Mushroom & Walnut, Açai & Goldenberry, and Coconut Ash & Banana bars from their "Super Dark" collection. This came to a total of $37.50 which was expensive but I felt that it was worth it. He posted them and told me that it cost a whopping $52.50! I was shocked but it was too late to go back by then. I transferred the money - $90 for six 85g chocolate bars! This was painful, but I managed to justify it to myself because I have been lucky enough to receive many free chocolate samples throughout my career. 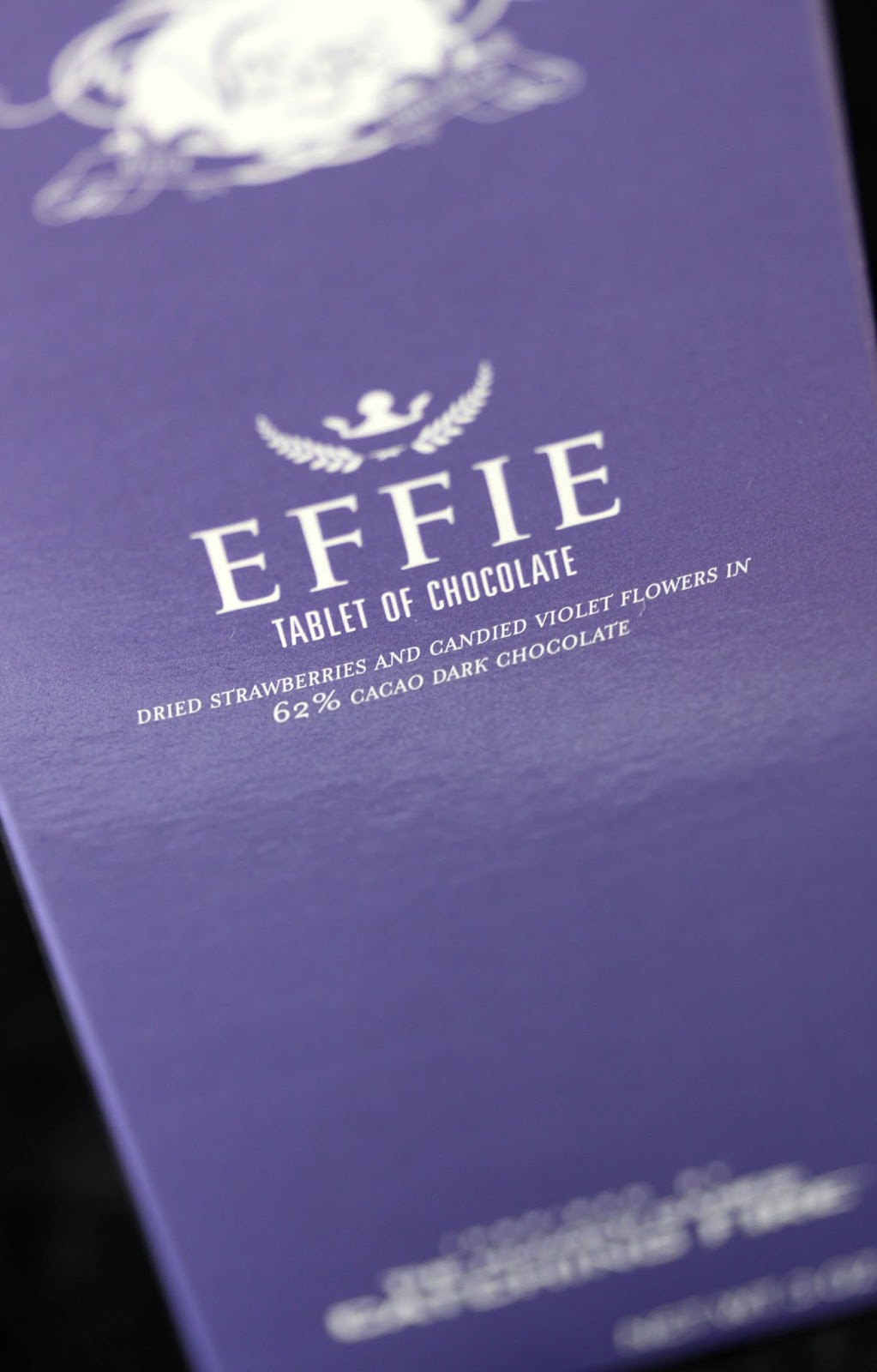 
Of course, the Effie Trinket bar had to contain pink and purple! I was a little unsure about combining dark chocolate with the subtle flavours of strawberry and violet but it works surprisingly well and the dark chocolate does not overpower the other flavours. There are subtle hints of both as one chews through the delicious dark chocolate. Effie would be proud! I would say, however, that the packaging could be a little more exciting and include a photo or, even better, an illustration of the character. 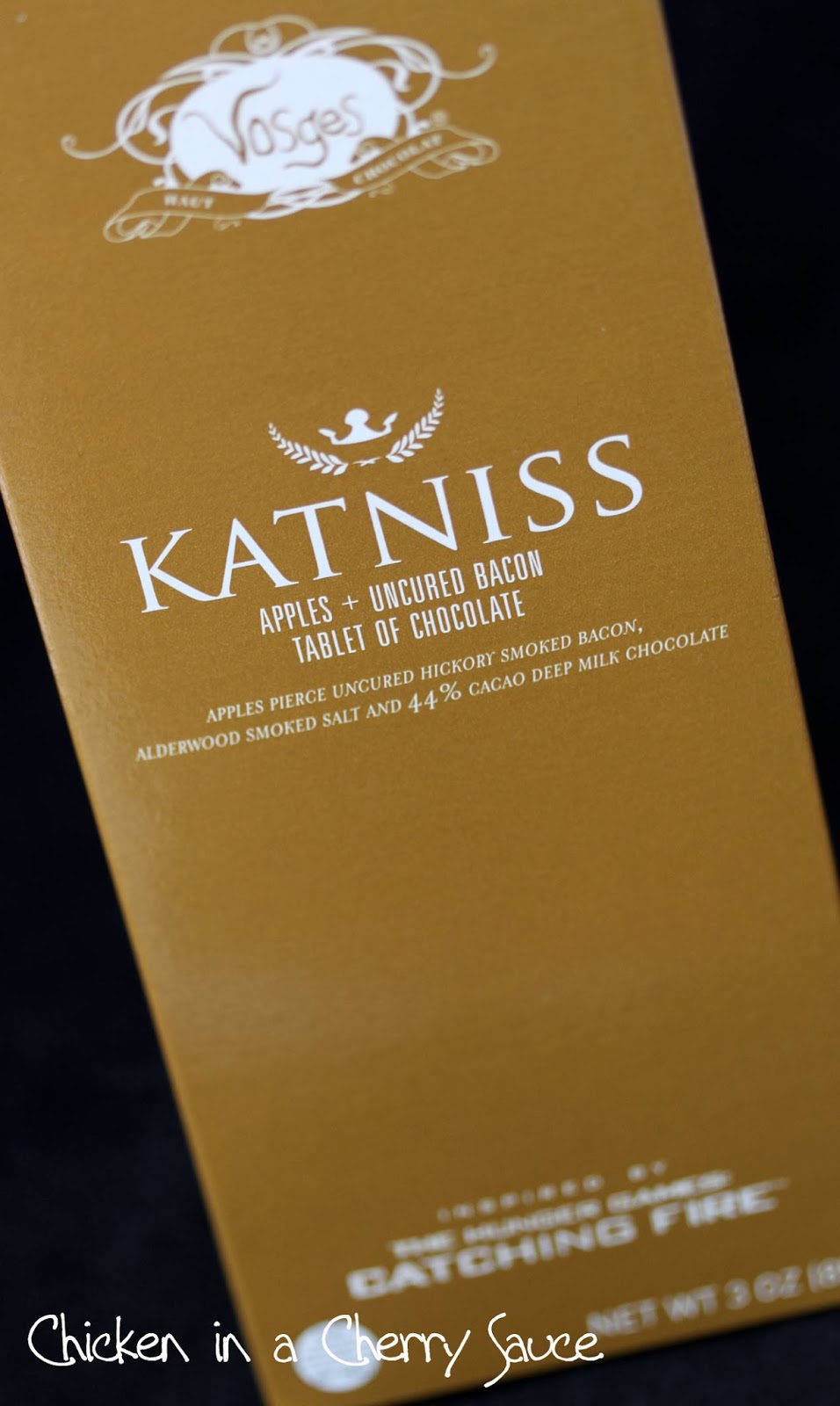 
This is the one that I was most excited about and I was not disappointed! The creaminess of the milk chocolate was a perfect match for the salty and smoky chunks of bacon. It was great to have something to chew on rather than just have the flavour running through the chocolate. I love the idea of putting pork and apple in a chocolate bar – I’m sure that wild turkey, squirrel or rabbit wouldn’t have gone down as well (for those of you who haven't read the Hunger Games, Katniss frequently hunted these animals)! Like every form of dried apple which I have tried in my experience, it softened and got a little stuck in the teeth on consumption. I assume that this is unavoidable, however, I would prefer more apple flavour in the bar as it was minimal. Again, I think that the packaging could be more exciting with an illustration of Katniss on the front rather than one block of colour. 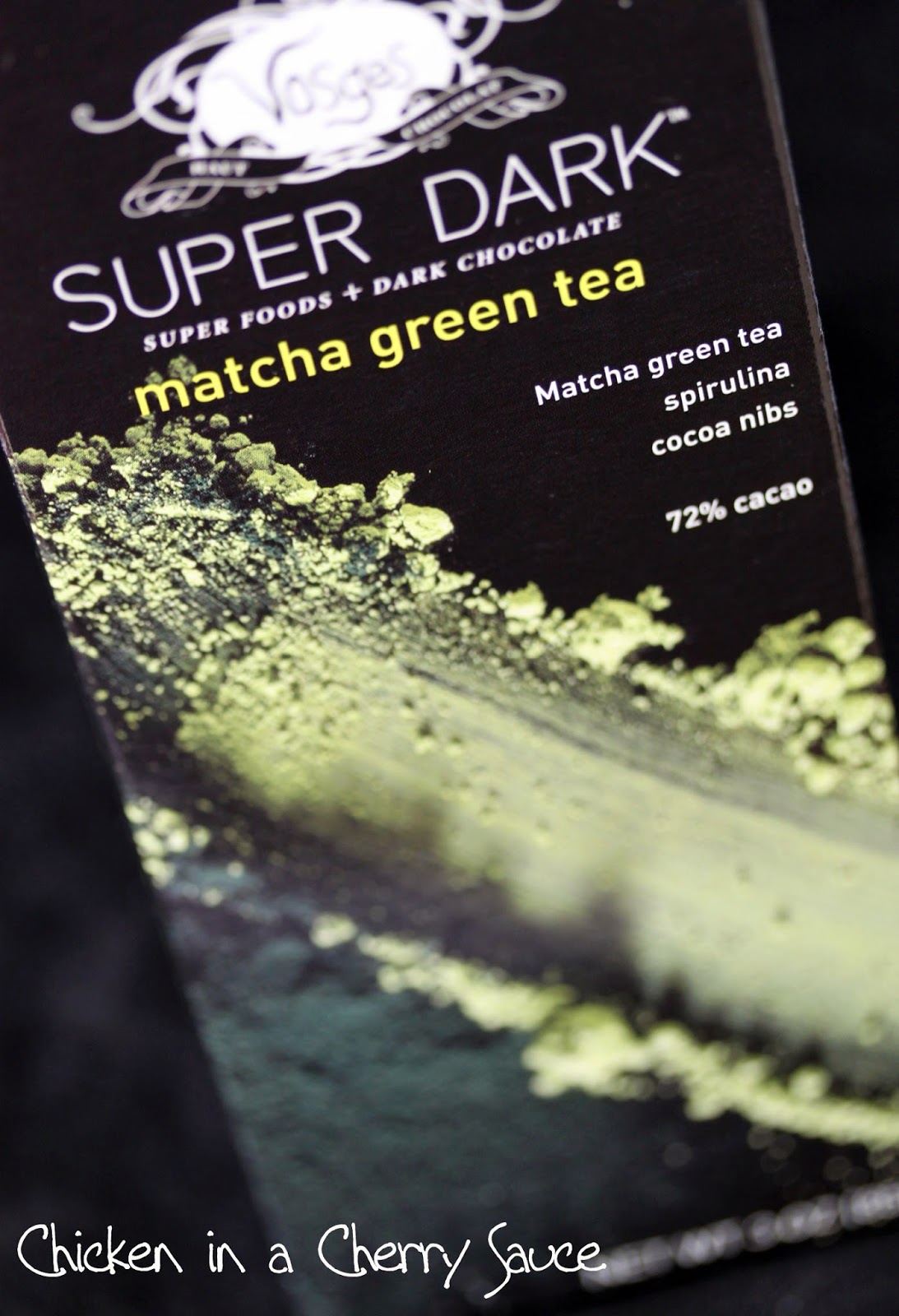 
Although I’m not the greatest fan of green tea, Vosges have really hit the nail on the head with this bar. The balance of green tea flavour with the dark chocolate works really well and the bar is enhanced by a crunchy texture from the cacao nibs. Spirulina isn’t particularly tasty, so it’s great that I can’t detect this flavour in the bar (I think that the main reason for its presence is for the “super food” properties). I think the packaging is stunning! 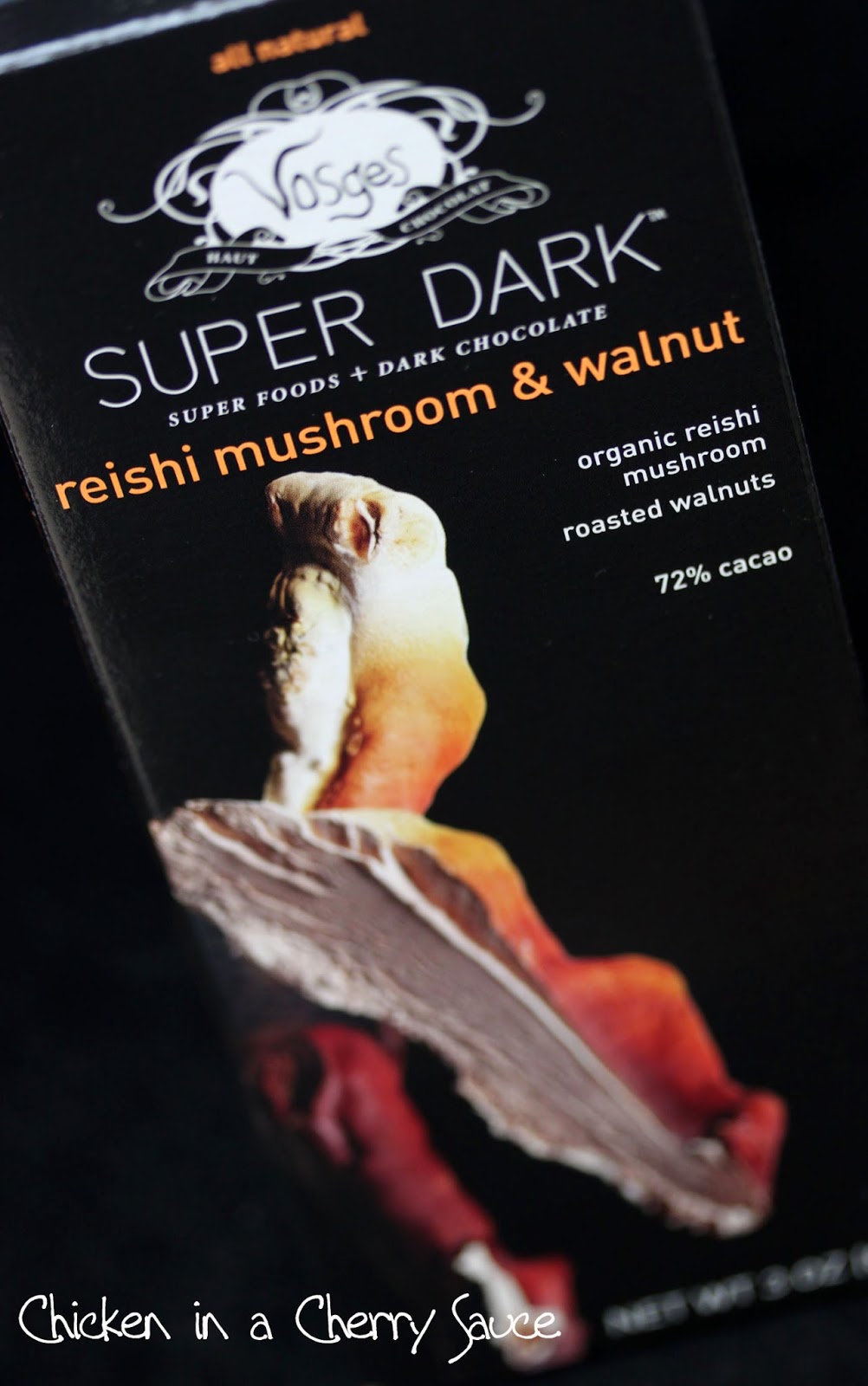 
I was really excited to try this one, too. I love the idea of mixing savoury with sweet. I tried a cocktail with truffle flavour recently and adored it! I was really looking forward to tasting mushroom with chocolate but, to my disappointment, I couldn’t detect any mushroom flavour at all. I admit that I wasn’t entirely sure what to look for with the Reishi mushroom flavour. I could sense a subtle savoury note, but, ultimately, all I could taste was the dark chocolate with some walnut notes. Nonetheless, the bar was delicious. The dark chocolate was very smooth and flavoursome and the walnuts gave a wonderful nutty and earthy flavour and texture. If it were just a “walnut and dark chocolate bar”, I’d give it 10 out of 10, but it isn’t. I would deduct 3 for the total lack of mushroom flavour. I do like the packaging but I would prefer some walnuts on there, too. Since the packaging states "Sri Lankan coconut" as well as "charcoal coconut ash" and has images of coconut pieces as well as ash, one would assume that this bar contained coconut. Upon trying the bar, banana was all I could taste with the dark chocolate. I checked the ingredients list and it read coconut ash and no other form of coconut. I think that, although I find the packaging very artistic and eye-catching, it is also a little deceiving. Like the spirulina, I think that the coconut ash is there purely for the "super food" properties. I did enjoy the subtle, natural banana flavour in this bar, but I would have preferred a little coconut flavour and texture. 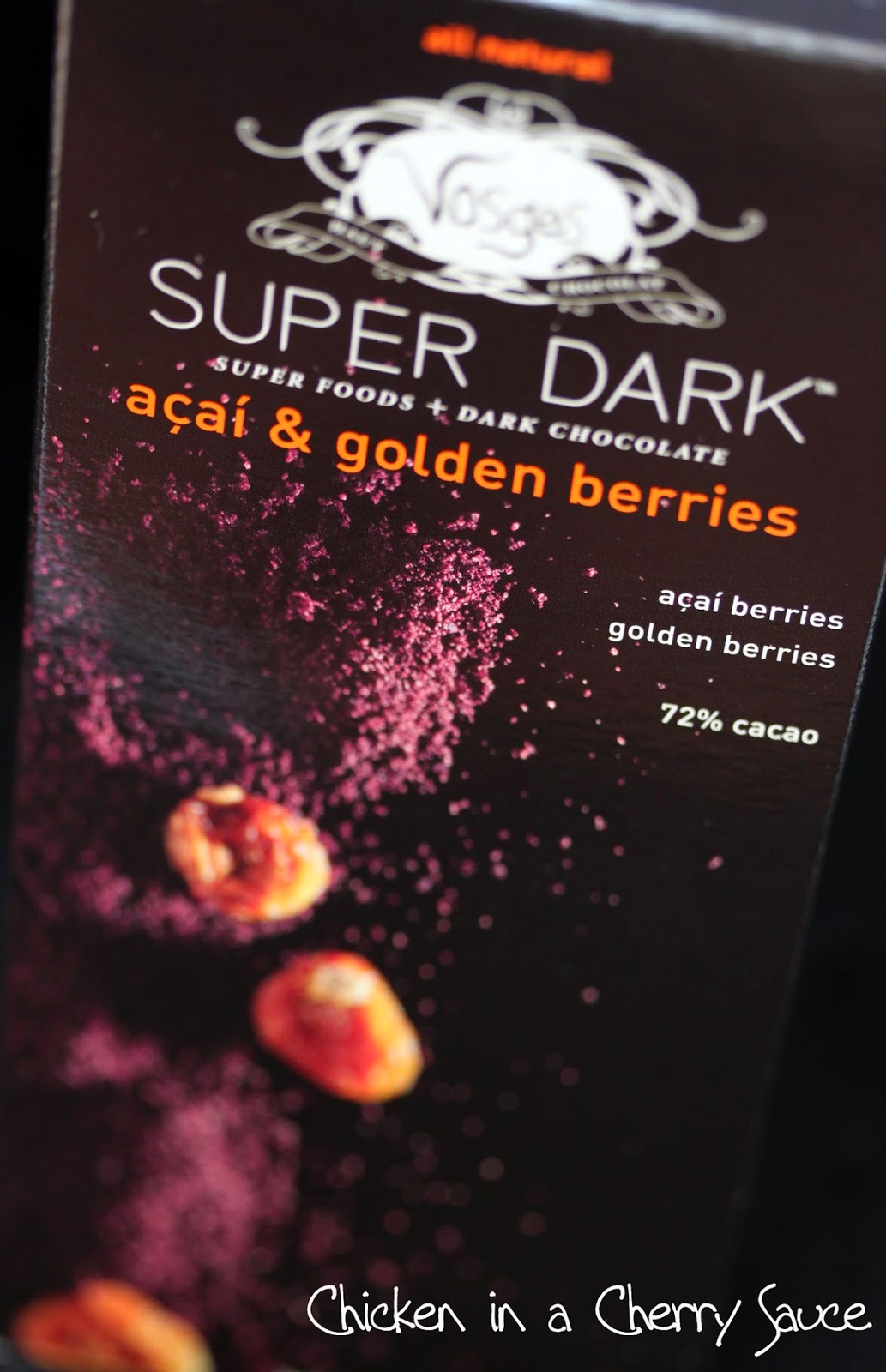 I admit that I’m not familiar with the flavour of açai but I expected it to be quite tart, like the physalis. I was pleasantly surprised how much I enjoyed the acidity of the fruits with the bitter dark chocolate. The flavours work really well together and give the bar a refreshing zing, different from that of citrus. I think that the packaging is very attractive along with the rest of the collection.

I'm fascinated by many of the products from Vosges and wish that I could try them all. I hope that they expand their business to the UK at some point. I have added these bars to my mini "Chocolate Library" which I keep in a shoebox. I look forward to expanding my collection as I discover more exciting chocolate bars!
Posted by Hazel - Chicken in a Cherry Sauce at 16:27
Labels: acai, apple, bacon, banana, cacao, California, chocolate, chocolate review, cocoa, coconut, matcha, mushroom, physalis, review, spirulina, strawberry, Vosges Haut Chocolat, walnuts