The Glamorous Life Of An Intern 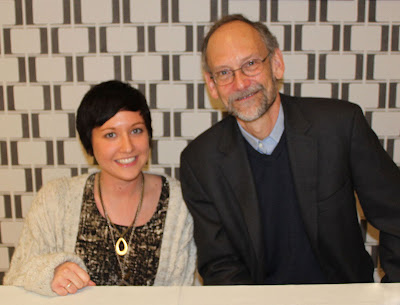 Myself and Harold McGee, San Francisco
I wish to make a note of reflection and appreciation.

I have been a very lucky young lady indeed. I have met the charming Head Chef from The Fat Duck, Jocky Petrie, and been given a sneak preview of the experimental kitchen. During my Food Science Research and Development internship with Tony Conigliaro at 69 Colebrooke Row, I met, my food hero, Heston Blumenthal. Just last week, I met one of the most respected writers in the world of Food Science, Harold McGee.

I have barely managed to hold onto reality through each of these experiences. When I began my career as a Food Scientist in my first year at the University of Leeds, I just had absolutely no idea what euphoric opportunities and experiences the future held. This just proves that persistence really is key in life.

Needless to say, I can barely sit still at the thought of what the future may hold. If it compares with anything that I have experienced over the past year, I am certainly looking forward to it!

Thanks to everyone who has given me support in my career. I would not be in this position in life without you.
Posted by Hazel - Chicken in a Cherry Sauce at 09:37 10 comments:
Labels: California, internship 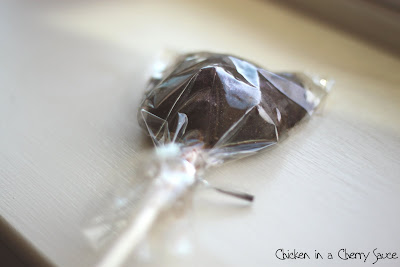 As I mentioned in my previous post, my favourite dish from Cochon 555 was the Toffee Bacon Lollipop that I took home and consumed the next day. 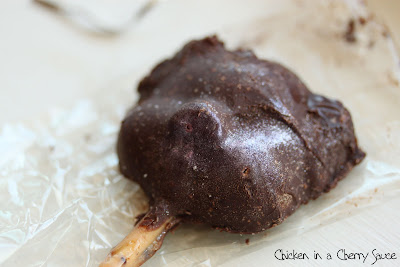 Not only does this lollipop look totally pleasing with its shimmering chocolate-drenched pig-face contour, it also delivers a rather unique culinary experience... 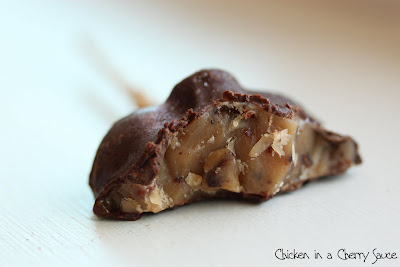 Each bite flooded my mouth with deliciousness. The texture of the toffee wasn't jaw-breaking, yet required a substantial amount of force to bite into, which was rewarded by the salty, caramelised and subtle meaty flavour. 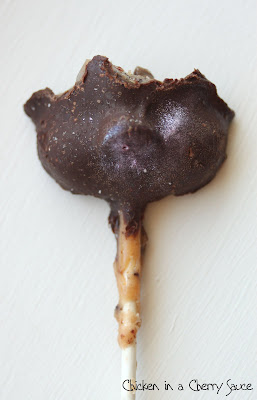 I am so sad that I failed to take home more than one of these rare and delectable finds! 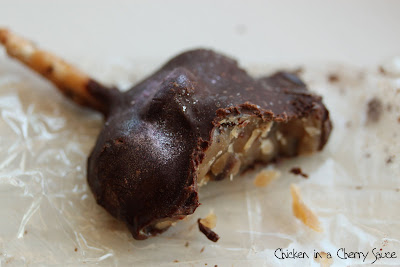 Vegetarians: beware. This post contains a lot of meat! 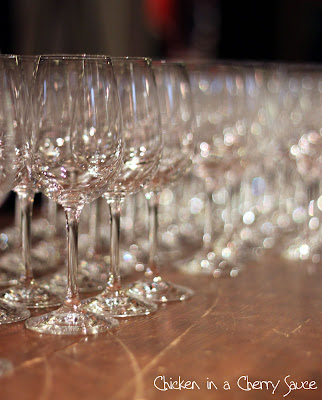 Many wines glasses at the entrance of the main event
I have recently been successful in gaining two internships here in California. One of the internships is with the Perishable Foods Council of Northern California which starts next quarter. The other internship is with Culture Magazine, which commenced two weeks ago. 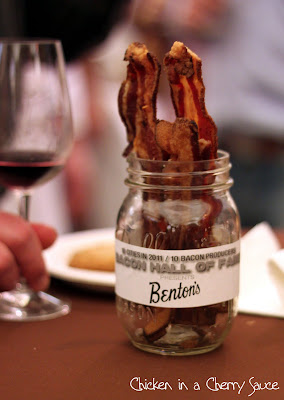 Strips of crispy bacon served in glass jars
Thus far with Culture Magazine, I have been performing various tasks in social media. My first main assignment was to attend Cochon 555 (cochon is French for domestic pig), eat lots of food, drink lots of wine, talk to lots of people, take lots of photos and blog about it. Pretty tough job, I think you'll agree! (Did I mention that we got a VIP ticket?!) 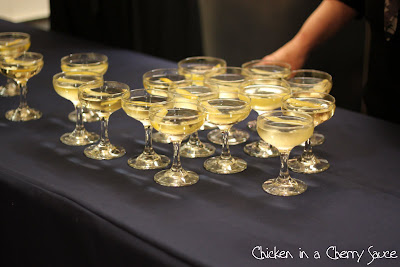 St Germain cocktails
The event was held at the beautiful Culinary Institute of America in St Helena, Napa. The VIP room event commenced at 3.30pm. As I meandered around the room with my St Germain cocktail, that was kindly handed to me on entry, I picked up various bites including Black River Caviar canapés, sustainable oysters (my first - I can't say that this was a pleasant experience!), crispy strips of bacon that were displayed in jars on almost every table, and plentiful doses of artisan cheeses from Cheese Plus. 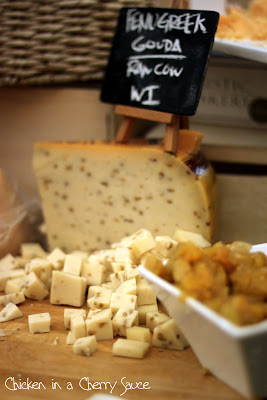 Fenugreek Gouda - on the cover of this season's Culture Magazine 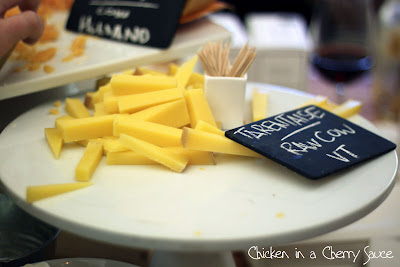 Tarentaise - my favourite cheese of the event 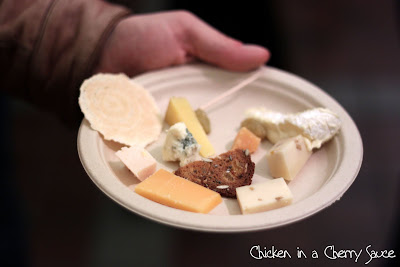 A sample of each cheese and cracker from the Cheese Plus stand
Cheese Plus also had a fondue to sample. I think the fact that I consumed four servings of the delicious goo says enough about how much I enjoyed it! 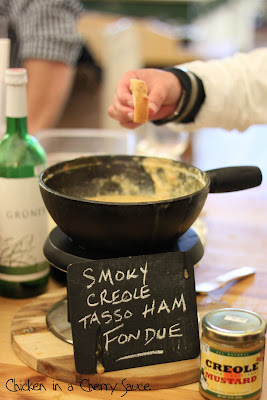 The fondue pot at Cheese Plus 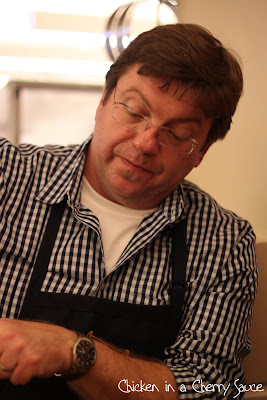 Ray Bair from Cheese Plus 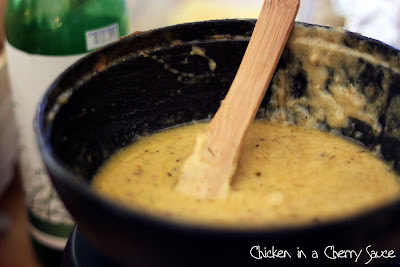 Gooey deliciousness - smoky creole tasso ham fondue
Then we got a sneak preview of the "pièce de résistance"... 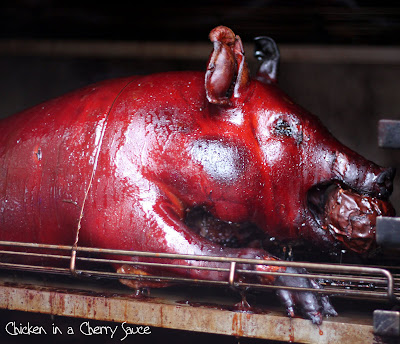 Look at those gorgeous colours on that cider-glazed pig! 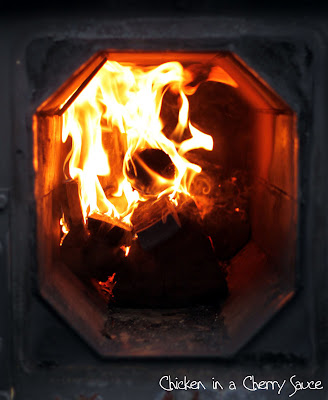 Inside the pig oven


Inside the main event were five chefs, five winemakers and five pigs. Some of the culinary works of art that were on offer included blood and tongue sausage, shredded pork with coconut and pineapple, bacon waffles, Asian pork buns, lard on toast and the most delectable pork pie created by Dave Cruz from Ad Hoc in Yountville, Napa. 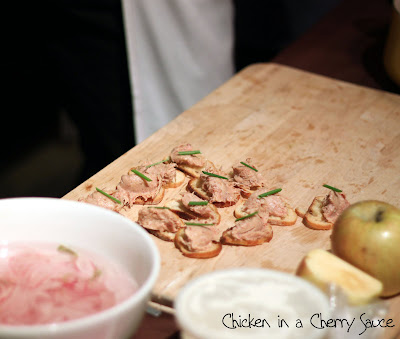 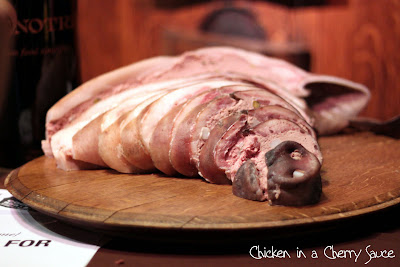 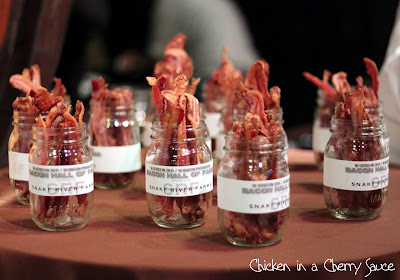 Jars upon jars of crispy bacon 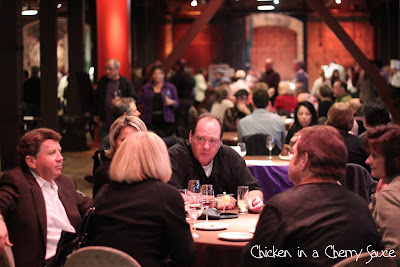 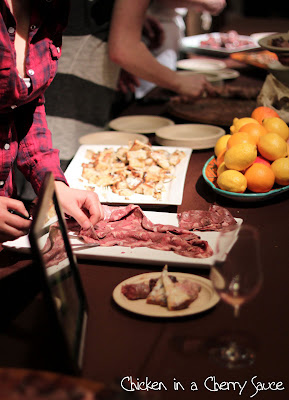 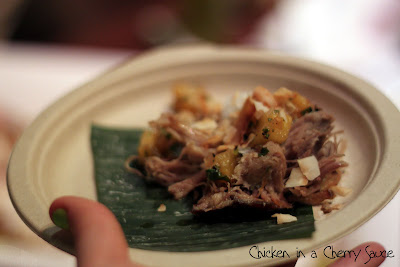 Shredded pork with pineapple and coconut 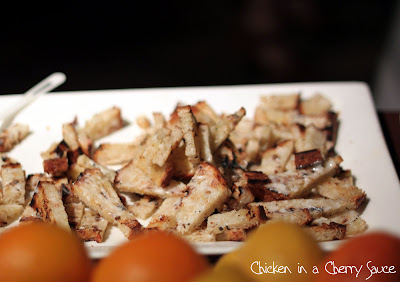 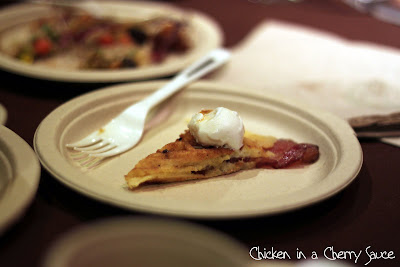 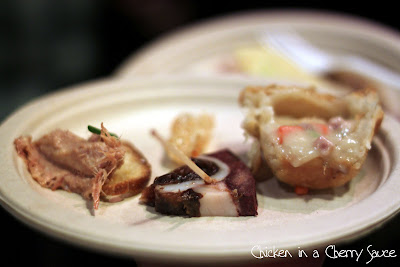 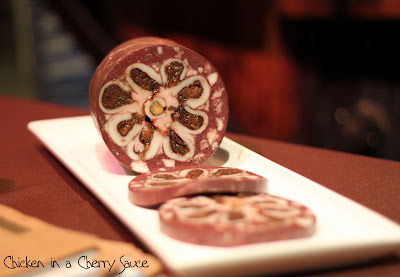 A rather beautiful fruity pork slice
Despite the fact that I generally prefer my desserts to be less sweet than the average, they still win me over at any food contest. I very much enjoyed the bacon waffle with the miniature scoop of ice cream. The winning dish for me, however, was the Toffee Bacon Chocolate Lollipop, which was so utterly divine that it will have its own blog post (coming soon!).

As the end of the evening drew closer, there was still so much to try, yet, my stomach was completely full and almost on the verge of popping! My taste buds had certainly been tickled by the explosive (but rather salty) culinary adventure. The various samples of wines and cocktails just added to my fuzzy contentment.

All in all, it was a very enjoyable day. Thank you Culture Magazine!
Posted by Hazel - Chicken in a Cherry Sauce at 13:32 14 comments:
Labels: California, cheese, pig, pork, wine
Newer Posts Older Posts Home
Subscribe to: Posts (Atom)