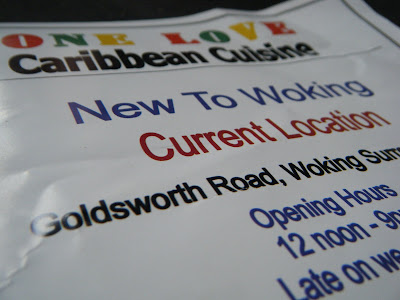 A leaflet came through the letterbox the other day, which advertised a new Caribbean takeaway service in Woking. My brother Owen and I decided to try it out one evening as it looked interesting and prices seemed fairly reasonable! 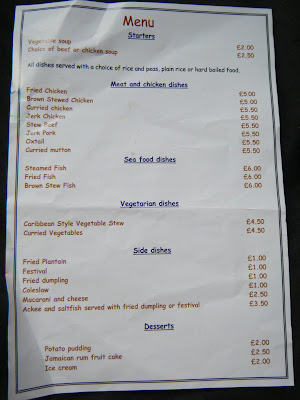 We ordered the jerk chicken and mutton curry with rice and peas, two lots of fried plantain, one lot of festival, one lot of friend dumpling, the potato pudding and the Jamaican rum fruitcake.

When we arrived back at my brother's place and unwrapped the Caribbean goods, we were disappointed to see no fried dumping, and only one portion of fried plantain, yet we were charged for them. 'Festival' turned out to be deep fried bread dough (the swirly-looking-thing on the left in the photo below). 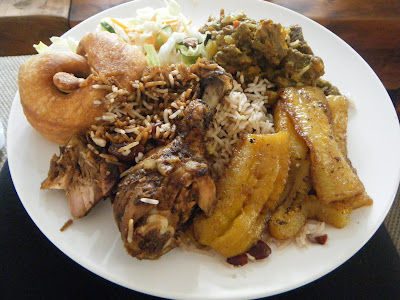 I first tried fried plantain in Las Iguanas with the Xinxim dish. The fried plantain was bronzed and crispy on the outside and soft in the middle - gorgeous! This plantain was quite slimy and greasy, not what I would call appetising! Perhaps the delay between cooking and eating the plantain caused a little of the potential crispiness to disappear, but I think it was mainly failure in the cooking...

The mutton curry had good flavours but was very dry. The jerk chicken was also very dry, and with the dry rice and festival, the whole meal was lacking a lot of moisture and sauciness which was very much needed as the whole meal was extremely dry, and I usually love to mop up remaining curry sauce with some bread or rice! 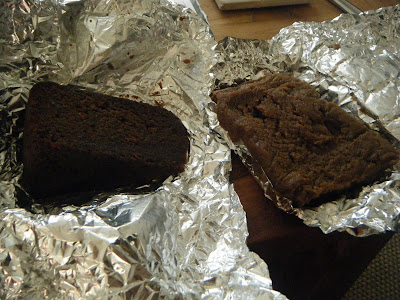 We heated the desserts and ate them with some ice cream. They were both fairly stodgy and tasted quite similar.

'One Love' was interesting to try, but I wouldn't recommend it, and probably wouldn't choose to order from here again.
Posted by Hazel - Chicken in a Cherry Sauce at 08:13
Labels: Caribbean, curry, takeaway